From Cultureel Erfgoed Standaardentoolbox
Jump to navigation Jump to search

This is a translation of the "IIIF: International Image Interoperability Framework" page. A framework has been developed to prevent images from collections being locked away in silos, where they cannot be shared with other applications: IIIF. The entire IIIF consists of four APIs, with the two most important ones being the Image API and the Presentation API.

Locked away in silos

Libraries, archives and museums are increasingly making their collections of manuscripts, paintings, 3D objects, sheet music, newspapers and maps available online. But if they all use their own systems and consultation platforms, the images from these collections remain locked away in silos – stuck in a single application where they can’t be shared with other applications.

In order to prevent this from happening, an international community of heritage institutions, museums and software companies has taken the initiative to develop a framework for sharing images such as these. Implementing the IIIF specifications doesn’t just mean libraries, archives and museums will be able to make their images available online; it also allows them to make the image details and metadata searchable, so they can be re-used and annotations added. 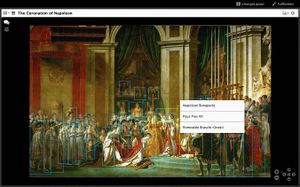 Example of image annotations: indicating the people portrayed on a reproduction of the painting ‘The Coronation of Napoleon’. You can even view the annotations on the photo in an IIIF viewer at: https://tools.wmflabs.org/mirador/?manifest=https://tools.wmflabs.org/wd-image-positions/iiif/Q1231009/P18/manifest.json. Click the speech balloon in the top left to display the annotations. CC0 (https://creativecommons.org/publicdomain/zero/1.0/deed.en)

If they use an IIIF-compatible image server, users can zoom in on an image and modify its dimensions, quality and rotation. And images from different IIIF-compatible image servers can also be compared with each other and annotated across different viewers. This means that people researching manuscripts can, for example, virtually reconstitute pieces of parchment torn from books and spread across different collections. The MMMONK project – run by the Public Library of Bruges and Ghent University Library, among others – is aiming to use IIIF to combine 734 digitised mediaeval manuscripts from various collections in a virtual library.

The entire IIIF consists of four APIs (application programming interfaces), with the two most important ones being the Image API and the Presentation API. [1]

The Image API makes it possible to request different forms of an image via a URL (website address), zoom in on images, choose the size for displaying the image, and selecting which part of the image to display. No new image files are created here; actions are performed on the same image in real time.

The Presentation API ensures that a heritage object is displayed correctly on a screen and provided with the right metadata to identify it and see its rights status. This is done using a so-called manifest – a structured text file in JSON format which refers to an image in the Image API. The structure of complex objects can also be recorded in one of these manifests, making it possible to display digitised pages from a book in the correct order, for example. The metadata in the manifest enables users to navigate through a book without losing sight of which page they are on, and the Presentation API can also be used to enrich images with annotations.

Local and subject-specific communities are important for developing the framework further. They can ensure that IIIF finds its way into a country and becomes the standard, and help set the agenda for future developments. Belgium does not yet have a recognised IIIF group, and the IIIF consortium does not have any Belgian or Flemish institutions as members, but there are several IIIF users, including Ghent University, LIBIS and the AfricaMuseum. Various other institutions are also preparing IIIF projects already, such as meemoo, Flemish Institute for Archives; the Flemish Art Collection; and the Royal Library of Belgium.

IIIF is useful for libraries, archives and documentation centres that want to share images from their collections with others online, make links with related collections via storytelling, or set up crowdsourcing campaigns. The IIIF community has already developed lots of open-source software that can be useful for your organisation’s operations. Check https://github.com/IIIF/awesome-iiif, where you can also follow developments in this emerging standard.