From Cultureel Erfgoed Standaardentoolbox
Jump to navigation Jump to search

In preparation for a preservation or digitisation project, priorities often have to be set to cope with the generally limited budgets available. In setting priorities for the preservation or digitisation of audio-visual collections and archives, several criteria should be considered first; content, uniqueness, formats, age, condition, etc. However, for film collections, two types of material needs to be identified in priority: nitrate films and acetate films suffering from the so called 'vinegar syndrome'. These two types of carrier are those most at risk of not being accessible anymore and which present the greatest danger to the rest of the collection. The information gathered in this text will help you to identify this material and select the items that need to be duplicated and/or digitised urgently.

Since the beginning of the film industry, formats and physical properties of film stock base have changed several times. A distinction between film types can be made according to different information. One of them is the width of the filmstrip. The most common widths used for films are summarised in the following table. 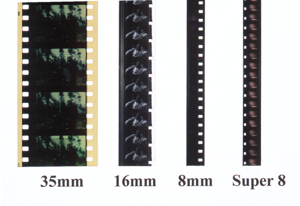 A second important element that differentiates film stocks from one another is the material used to produce the transparent substrate on which the light-sensitive emulsion has been applied. There are three main types of film base:

The resources listed below allows for further film stock identification beyond this text's scope:

Nitrocellulose was used as the first base for film material and was produced by Eastman Kodak from 1889. It was used for cinema, photography and X-ray films. Production of nitrate films for cinema stopped in 1952. The high flammability of nitrocellulose led to its replacement by cellulose acetate base films. While it is rare, nitrate film can burn from spontaneous combustion without any other source of heat. Even in good conditions it burns quickly and unlike most materials, it doesn't need any exposure to air to keep burning as nitrocellulose produces its own oxygen while ignited. In addition, the smoke created by nitrate film combustion is extremely toxic. It can therefore be extremely difficult to stop a fire caused by nitrate film.

How to identify nitrate films?

Checking the date of the film is a first step in identifying a nitrate films. As mentioned before they were produced from the beginning of the cinema up until 1952. This means that few films shot after 1952 used old nitrate film stocks.

Nitrate film stocks were used to produce 75mm, 70mm and 35mm gauges. If your collection or archive contains 16mm, 8mm, 9,5 mm or other small and amateur formats, they are not nitrate films. Apart from 35mm, only old formats from the beginning of the cinema such as 70mm and 75mm used nitrate base film stocks.

Several written indications often present on the edge of film stocks such as a star shaped symbol can allow one to identify nitrate films. Other inscriptions on the edge also indicate that it is nitrate: 'NITRATE FILM','NITRATE', 'N', 'flam', 'flamme' and / or horizontal stripes between every fourth perforation. There is however a possibility that a written indication was copied from a nitrate film to an acetate film during duplication.

If the word "Safety" or "S" is visible on the edge of the film stock, it means that the film is not nitrate but acetate based. Acetate and polyester films are also called "Safety film" because they are more stable and don't burn as easily as nitrate film. The only reason why a nitrate film might present the 'S' or 'Safety' inscription would be because at some point an acetate film was duplicated using nitrate film stock, which is very unlikely.

Nitrate film can also be identified visually due to the cellulose nitrate's chemical decay. As described in the Home Film Preservation Guide, nitrate film tends to deteriorate in five stages: 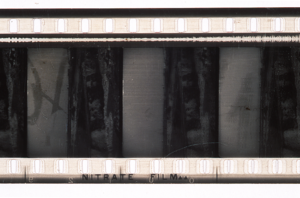 When none of the previous forms of identification are useful, a float test can be conducted by immersing a small sample of film in trichloroethylene solvent. If the sample floats then it means that the film has an acetate base and if it sinks then it has a nitrate base. A polyester base film sample would stay somewhere in the middle.

How to store nitrate films?

The best and safest solution is to contact the Royal Belgian Film Archive (T: +32 (0) 2 551 19 02 / secretariat@cinematek.be) and deposit your nitrate films.

Nitrate films should be isolated and stored away from other types of films, as the gas produced by the deterioration of nitrate films can damage healthy acetate or polyester films. However, the gas and heat created while in storage must be allowed to evaporate, as it will otherwise increase the risk of fire. Because of their dangerous nature, nitrate films should not be stored at all, but copied to a new stock and destroyed. However, for temporary storage before duplication and/or digitisation, the following recommendations should be taken into account:

For further information on how to store nitrate films, visit the online references listed at the end of this text.

While more stable and not as flammable as nitrate films, acetate films are subject to a deterioration process known as "Vinegar Syndrome" which results in acid acetic gas being released from the films. While nitrate film only concerns 35mm, 75mm and 70mm collections, vinegar syndrome can affect any type of film gauge in an archive.

How to identify vinegar syndrome?

Vinegar syndrome is named after the smell of acid acetic (present in vinegar) created by the degradation of the acetate base film. If one can smell a vinegar like odor in an archive, it is very likely that one or several films have already started to deteriorate.

A further way to find out if your films are subject to vinegar syndrome degradation is to use an A-D strip, a tool for detecting the presence and evaluating the amount of vinegar syndrome in your collection. These paper strips have to be placed inside a closed can, bag, box, or cabinet, where they will change color in the presence of acid gas produced by the degradation of acetate film.

How to store films with vinegar syndrome?